Slightly spoilery; current as of Issue 12. 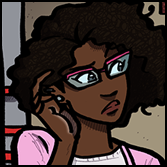 Iolanthe Marquez: Iolanthe is kind, smart, and awkward. She’s also brave as all get out, as evidenced by her quest to find out what happened to her missing partner, Amparo. Let’s hope this bravery lasts through the land of the dead and learning about Bright World. 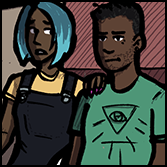 ritha & Jason: Iolanthe’s roomies and best friends are pretty worried about her. They’re here to support her, though, and have dinner ready when she gets back from the land of the dead or whatever. 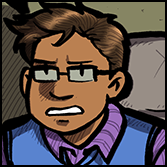 Al: Al did not mean to get involved in this. She’s just a typical gal who uses her abilities to speak with the dead to dig up dirt on enemies of the lesbian mafia. Getting involved in finding out what happened to Iolanthe’s partner was never in her plans – but here she is anyway. 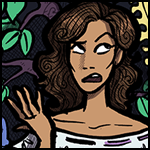 Juliana Valverde: Juliana is the first human Fawn meets in Bright World. Growing from hostility to begrudging allyship to fondness, it is a good bet at this point to say Juliana thinks of Fawn as a friend. Juliana works at Mimí’s bar, and does what she needs to keep herself afloat in Bright World. 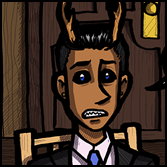 Fawn: Fawn is in some trouble. Their name was stolen, and now they’re trapped in Bright World, working for a cruel monster and slowly becoming something inhuman. For a self-described “bad kid,” they’re awfully thoughtful and kind, especially when it comes to helping other humans out. 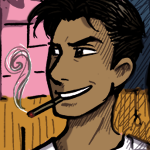 Rafael Loya: Rafael, the second human Fawn meets in Bright World, runs a humble juice stand at a market. Charming and louche, Rafael is proud of standing on his own in Bright World, but isn’t above collaborating to get what he wants, though it might cost him an arm and a leg. 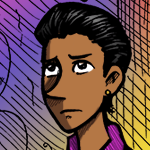 Amparo Uribe: Amparo has made some mistakes. The most pressing of these was stealing the name and shape of a young human, throwing them into Bright World, and then living their life for a good decade or so. Now they’re back to being a cat, with a limited ability to fix what went wrong. 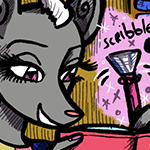 Mimí: The amazing and charming Miss Mimí  thinks of herself as a benevolent employer and font of kindness, taking in humans in need, but that is very much her perspective, not so much that of those in her employ. Those who can have opinions, anyway. 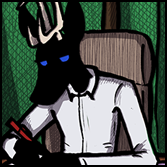 El Ciervo: Fawn’s boss. Seems to be a solid darkness in a vaguely deerish shape. Casually sadistic,  condescending, and passive aggressive as hell. Hobbies include cutting people up and doing this thing where he goes to Mimí’s bar, takes up a piece of prime real estate, and nurses a single drink all damn night.